2nd Month, Day 11
Cast: Mr. Whiteface (Rep 4 Star), Lynn (Rep 4 Grunt), Dotty (Rep ? Special)
Objective: Discover & leaving Whiteville (on foot = one full month) towards rural area.
Area: Whiteville city limits, suburban
Special:
1. This mission uses my Lazarus House Rules.
2. Gather enough food to end month 2 (see Chickunnnh!).
"Six days" said Whiteface "I can't believe it took us six *BLEEP!*in' days just to leave town."
"Yeah, but we made it, right? You'll see, everything will be so much easier in the countryside." Lynn replied, smiling weakly.
"Sure, but we ain't ready yet. We need to get as much food as we can before leaving. There won't be many buildings out there."
Lynn took a deep breath while counting to three.
"White...we are talking about rural Georgia and not the *BLEEP!*in' Kalahari..."
He stared at Lynn with a blank face.
"Kala-what?" 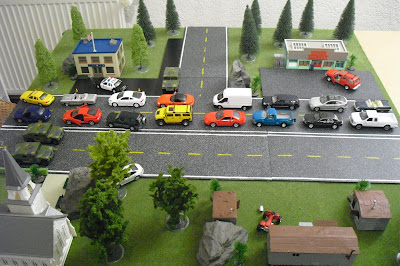 Setup: It’s a standard 4’ x 4’ setup. Team Whiteface is placed in section 7 behind a small shack. Three PEFs are present: REP 4 in section 1 next to the church, REP 4 in section 2 behind the army vehicles and REP 2 in section 6 next to a tree.
As far as I know there will be no Lazarus effects. 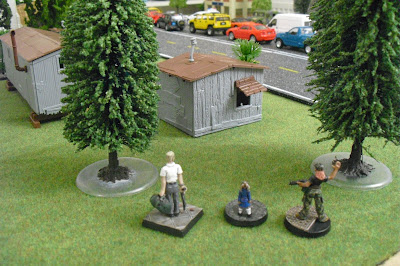 Turn 1:
(3 / 3) Everybody takes some time to scan the area.
"OK, you're probably right about gettin' some food..."
"Don't worry Lynn, this will be easy. Just a walk in the park or something..."
Turn 2:
(2 / 3) All are active, but two PEFs move first.
PEF #1 moves from the church to section 2 (behind military Humvee).
PEF #2 moves from the Humvees to section 5 (behind yellow H2).
Team Whiteface moves to the front of the wooden shack, but stops at the door. 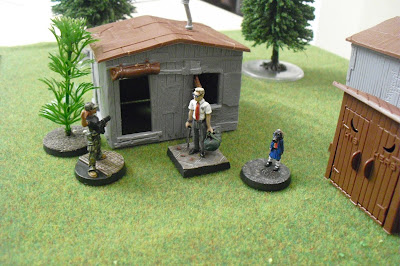 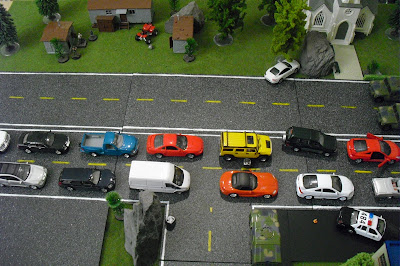 PEF #1 is an involuntary encounter with a hostile gang. Their fancy convertible has broken down on the road behind them. 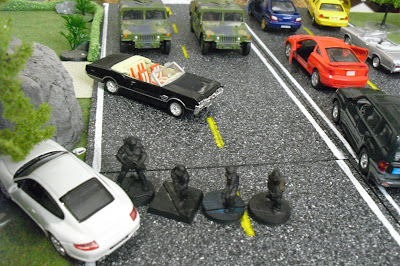 Ganger #1: REP 5, BAP (out of range)
Ganger #2: REP 4, SMG
Ganger #3: REP 4, MP (out of range)
Ganger #4: REP 3, SMG
Team Whiteface wins the encounter awareness test and will do an In Sight test with 2d6.
Whiteface and Lynn fire full bursts at the gang. As a result Lynn misses and is out of ammo, while Whiteface kills the boss #1 with two "1" OD.
It's time to test the remaining gangers. Ganger #2 will hold his position, but G#3 and G#4 dive for cover behind the Porsche. 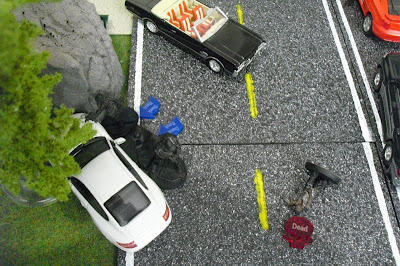 PEF #2 turns out to be a false alarm.
PEF #3 is another involuntary encounter. Maybe someone to help me? Yeah, right... 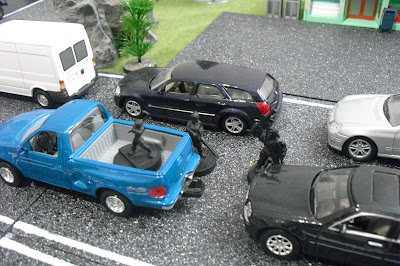 The new arrivals are three members of the cannibal cult of chtulhu. They are hungry and hostile.
Cultist #1: REP 5 Leader, Assault Rifle
Cultist #2: REP 4 Sister, Shotgun
Cultist #3: REP 3 Follower, Crowbar
Team Whiteface wins the encounter awareness test and is allowed to do the In Sight test with 2d6.
Mr. Whiteface will fire a full burst at the cult leader, but Lynn can't do anything as she's out of ammo. Cultist #1 is going down, OOF.
The other cultists didn't expect this much resistance. Both duck back behind the cars - C#2 just because she's out of range by 1 inch. 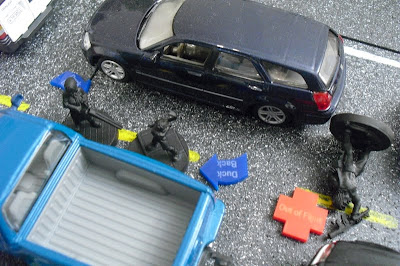 9 shots fired generate 4 zombies.
Turn 6:
(1 / 5 / 6) Only Team Whiteface activates. Good thing I downed their leaders.
The whole Team enters the closest shack. They find a REP 3 civilian with a Bolt-Action Rifle. I score a +2 positive reaction...and roll a "1". OK, at least this guy won't cause me any trouble. 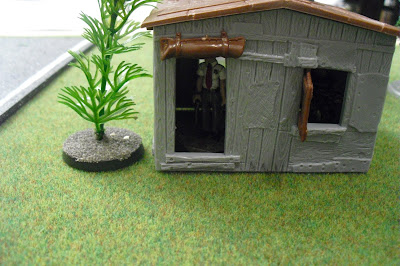 Lynn uses this turn to reload her assault rifle, while Mr. Whiteface fires through the open door at Ganger #2.
The ganger - being behind cover - is missed three times. He reacts by snap firing back at Whiteface - who is in cover too - and scores two *BLEEP!*in' hits.
Thanks to being a Star Whiteface is only Out of the Fight. Wrong day, wrong dice. Lynn decides to hold her position. 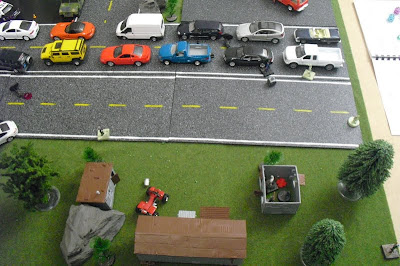 6 shots fired generate 3 more zombies.
Turn 7:
(1 / 6 / 2) Gangers & cultists acting first, followed by Team Whiteface.
Ganger #2 opens fire at Lynn who's in cover behind the window opening. He can't repeat his lucky roll and scores no hits. His target scores two successes in her Received Fire test and shoots a hail of bullets at the ganger. She doesn't hit anything AND is out of ammo again. I am sure I heard my dice laughing at me.
Now the gangers do their reaction tests and ganger #2 opens fire at Lynn again. He misses and is out of ammo too. Fair enough.
Lynn's following Received Fire test is another blow below the belt. She roll's a double "6" and will now retire. She leaves through the window in the back of the shack.
Ganger #3 and #4 dare to leave their cover and open fire at the single zed in front of them. They score a total of 6 hits. Zombie boy is dead, dead, dead. 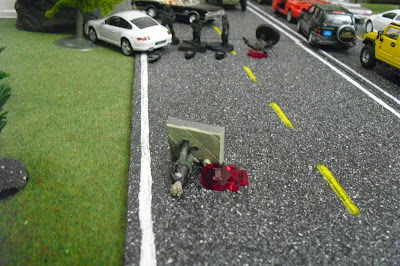 The cultists leave their cover and step on the road. An improvised NPC Interaction determines that both groups don't like each other, but will not open fire.
Comment: OK. This calls for some desperate measures. What I need is a...
Deus Ex Machina!
Or in this case Dea Ex Machina. You see, Dotty has never taken any action in my missions, but has always been counted as a full character when determining the amount of NPCs in an encounter or when sharing food. She will from now on be a REP 2 character and not beeing protected by the "Bleens" rule anymore (see ATZ, p.40).
Dotty (REP 2) is the only member of Team Whiteface to be activated this turn. She is already in contact with her father and will allow him to try for recovery during the encounter. With lots of shouting and crying she manages to get her father back into the action.
"Whoa! I think we gotta go now!"
I was wondering for a second or two if Mr. Whiteface is allowed to move directly after regaining consciousness and couldn't find anything about this in the rules. Whatever, with two successes I decided to let them follow Lynn through the back window. 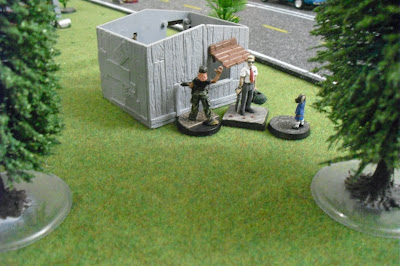 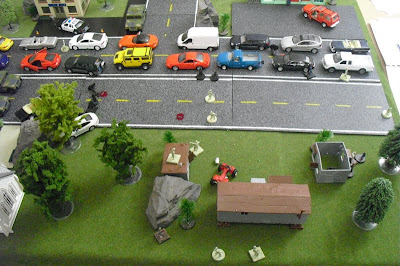 "Daddy, are you ok?"
"Yeah, but my head hurts like hell..."
Turn 9:
(4 / 6 / 4) No side activates.
"Would Lynn have left us behind?
"I don't think so, but she's tired and everyone has a breaking point. C'mon Dotty, we gotta help her."
Turn 10:
(1 / 4 / 4) Only Team Whiteface activates.
Mr. Whiteface rallies Lynn with full successes. Everyone leaves the battlefield.
Final comment: Well, sometimes surviving is the best you can hope for. This mission was a failure for everyone, but no one loses a point of reputation. I was pretty close to recruit a civilian with a Bolt-Action Rifle, but alas...no.
Team Whiteface hadn't time to gather any food and will have to stay in month 2 & Whiteville for at least one more mission. Because this mission was pretty short, I guess the next mission will probably use the same table. I hope you didn't mind my little...err...improvisation.
What more is to say? Oh, it's pure coincidence that this batrep is puplished at the same time as Bryan's latest batreps. I started playing this scenario last friday.
Take care,