A hiking we will go!

2nd Month, Day 5
Cast: Mr. Whiteface (Rep 4 Star), Lynn (Rep 5 Grunt), Dotty (Rep ? Special)
Objective: Discover & leaving Whiteville (on foot = one full month) towards rural area.
Area: suburban parts of Whiteville
Special: This mission uses my Lazarus House Rules. I didn’t roll a „6“ this time.
Almost two weeks since they had seen military aircrafts, but no help had come and those zombies were still around. Whiteface wasn’t in a decisive mood, but something had to be done.
“What about Atlanta? There have to be refugee camps and our military wouldn’t let them big cities down, right?” he asked, trying to convince himself.
“Listen White…we’re talkin’ about thousands, no wait, make that millions of potential zeds and don’t get me started about military protection. I had enough of this in the last few weeks, remember?!”
“But…”
“No, you’ll get yourself and Dotty killed or worse! I kinda like both of you, but there’s no way I’m walking into a *BLEEP!*in’ deathtrap!” Lynn replied resolutely.
“So, what ARE we doing?” Whiteface asked cautiously.
“How about a trip to the countryside?” 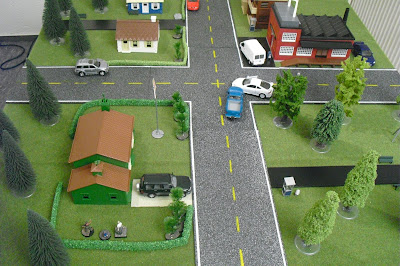 Setup: It’s a standard 4’ x 4’ setup. Team Whiteface is placed in section 7 behind a house. The scenery is intended to recreate a suburban residential area of Whiteville, but there is a small food factory at the crossroad.
Three PEFs are present: REP 6 in section 3, REP 5 in section 4 and REP 4 in section 1. 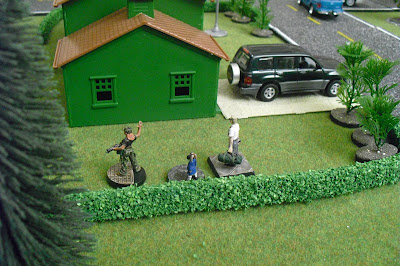 Turn 1:
(1 / 2) All are active, but the PEFs move first.
One PEF moves from section 3 to section 2 and another one moves from section 4 to meet Team Whiteface in section 7.
The REP 5 PEF is resolved as three civilians (#1 REP4 Pistol, #2 REP 3 Pistol, #3 REP 2 SMG). This is good! I will try to recruit them for Team Whiteface.
Their leader talks to Lynn because she is the leader of my group. The situation gets out of hand and Lynn is knocked out with an unexpected punch. I hate this! 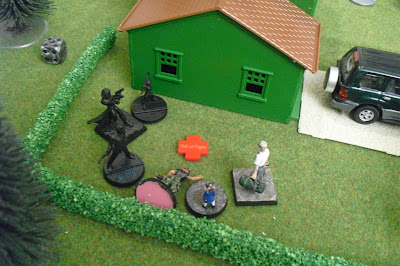 The last PEF moves from section 1 to section 2.

Now it’s Whiteface’s turn to activate. He fires a full burst into Civilian #1 and kills him. Civilian #2 decides to stay, but #3 retires into the trees.
3 shots generate 3 zeds. 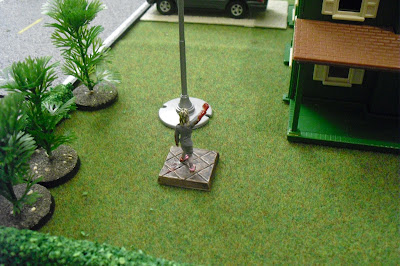 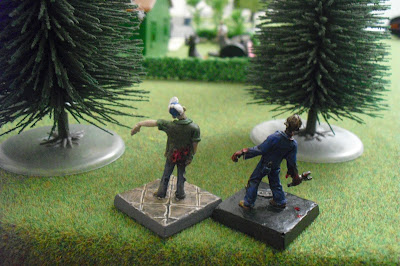 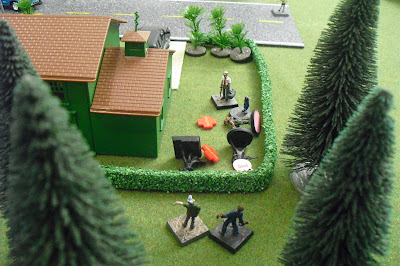 5 shots generate 3 zeds.
Turn 4:
(2 / 4) Zeds act first, then Team Whiteface.
Zombies start feasting on Civilian #2 (and will do so for one turn) and some zombies are moving closer. One of them charges Whiteface who holds his position and kills the zombie. 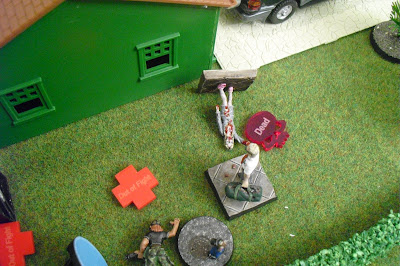 Whiteface activates and grabs Lynn to carry her away. They move along the front of the house.
Turn 5 – 6:
(2 / 2) (2 / 2) A moment of deep contemplation. What to do? Where to go?
"Lynn, don't you dare leaving us alone! We need you. Oh, *BLEEP!*".
"Daddy, your aren't supposed to say these bad words..."
Turn 7:
(1 / 2) All activate, zeds go first.
The zombies move and start feasting again (for two turns).
The Whiteface family carries Lynn around the house. They discover the REP 6 PEF on the road…and all of a sudden I realize something: Blimey, I did it again! I forgot to move the PEFs and I forgot to check for Recovery during the Encounter. Whatever, I’ll try to do everything right from now on.
The PEF is resolved as hostile NPCs. There are 4 more zombies. Great. 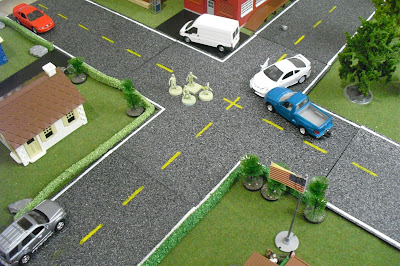 Turn 8:
(4 / 3) All activate, but my Team acts first.
Better late than never, Lynn checks for recovery and scores two successes. She’s back in action. Team Whiteface moves and fires single shots at the new zombie mob. Two zeds will now rest in peace.
The last PEF activates and moves into sight. This time I am lucky: it’s just a false alarm.
Finally some zeds move and some continue to feast.
2 shots generate 1 zed.
Turn 9:
(4 / 2) All activate, but Team Whiteface acts first again.
They jump over a hedge and confront the remaining zombies on the road. Two single shots barely manage to knock down to zombies. 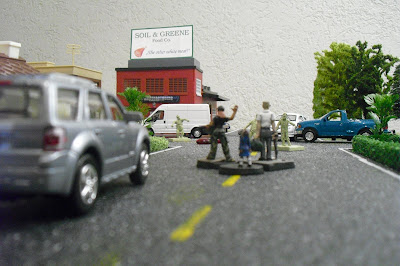 The zeds activate an finish their feast. Both knocked down zeds regain feet.
2 shots fired generate 1 zed.
Turn 10:
(6 / 2) Only the undead will activate this turn.
Some zombies are shuffling around, but two of them charge Lynn and Whiteface. Whiteface will fire & melee, Lynn is just preparing for melee. The single shot misses the charging zombie. 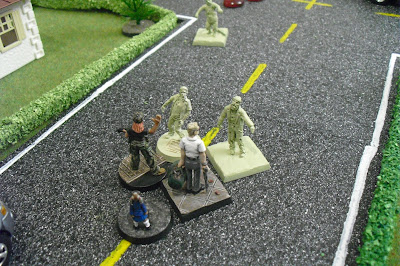 Lynn kills her assailant in the first round of combat, but Whiteface has to go into round 2.
In the second round Lynn scores 0 successes (vs. 0) and Whiteface is now down to 1d6 vs. 1d6. I am pretty sure that my dice hate me!
In the third round Mr. Whiteface is forced to use his LUCKY attribute or suffer the consequences of losing a melee versus a zombie. He is kind of LUCKY and wins his melee.
1 shot generates 1 zombie. Yeah, right.
Turn 11:
(6 / 6) A moment of random nothingness.
"Hmm, we should be more careful. That was way too close for comfort..."
Turn 12:
(2 / 4) All activate, but zeds go first.
Most zombies move around randomly, bouncing against walls, but one zed charges Lynn. Team Whiteface scores two fire & melee results on the Being Charged test, but only manage to achieve a meager Knock Down result. 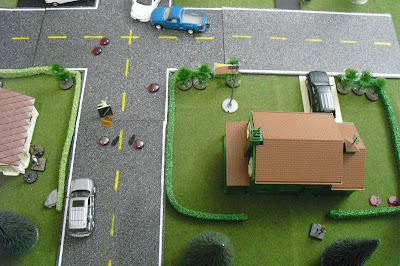 Lynn, Dotty and Whiteface activate and decide to continue their move & fire tactics. Both score killing shots on their single target.
4 shots generate 1 zed.
Turn 13:
(4 / 4) A moment of puzzled hesitation.
“Did you see that, Daddy?!”
“The chicken?”
“Yes, can I have his costume?!”
“No Dotty, you definitely won’t take this chicken suit!”
“Awww, Daddy…”
Turn 14:
(2 / 1) All activate again, but this time Team Whiteface is acting first.
They do a fast move towards a small blue house in the Whitehair Retirement Homes area. 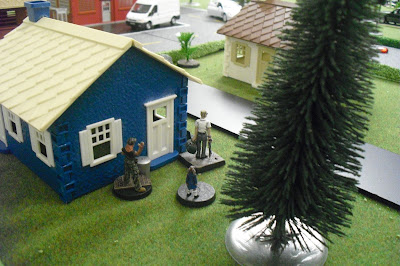 All the zeds move.
Turn 15:
(5 / 2) All activate and Team Whiteface is acting first again. I am on a winning street.
They enter the blue building to discover two zombies. After winning the zombie surprise Lynn knocks down her target and Whiteface kills the other zed. Almost every zombie on the board is outside of 24”, so this shooting shouldn’t have caused too much trouble. 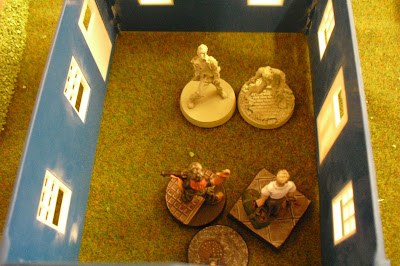 All zombies move. One of them notices Civilian #3 between the trees and charges him, but he escapes from the board after a failed Being Charged test. 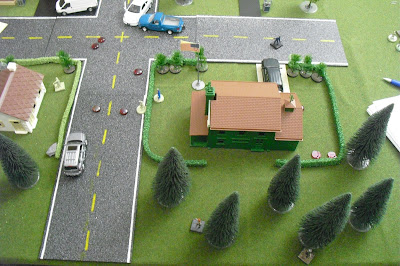 2 shots generate 1 zombie.
Turn 16:
(4 / 3) All activate and Team Whiteface is acting first again.
Lynn finishes the knocked down zed while White is looting the other. He finds a pistol. Oh great, I could open a gun store.
All zeds move, but without a real motivation.﻿
﻿
Turn 17:
(1 / 4) All activate and this time the zombies go first.
All the zombies move. One of them arrives at a window, causing an In Sight test from Lynn. She fires but misses, because of her target being in cover. 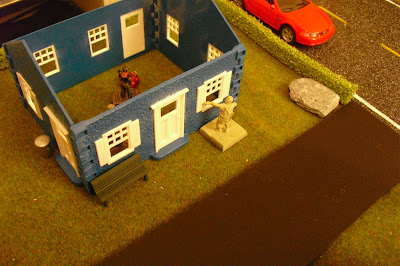 Lynn moves and continues firing, but misses again. Whiteface searches the second zed and discovers another pistol. Great.
2 shots generate 0 zeds.
Turn 18:
(3 / 6) Only Team Whiteface is allowed to activate this turn.
Both leave the house and charge the zombie at the window. They kill him in the first round. 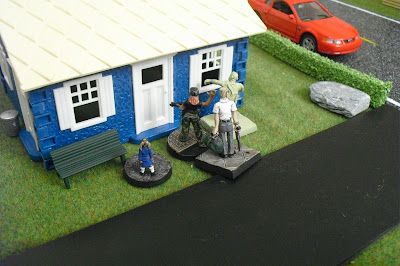 Turn 19:
(5 / 3) All, but Team Whiteface goes first.
Being in a zombie hunting mood, they run around the house to charge another roamer. The female zed is killed. 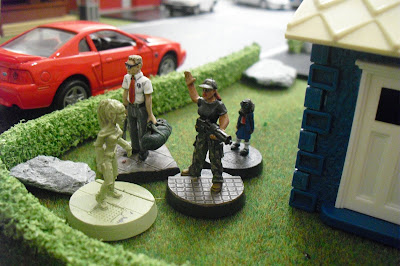 The other zombies activate and move. 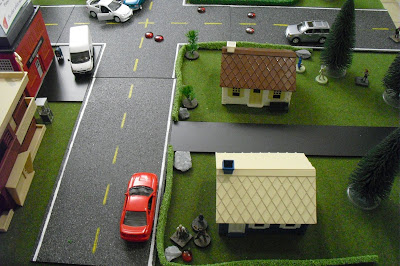 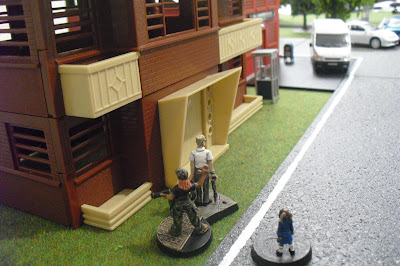 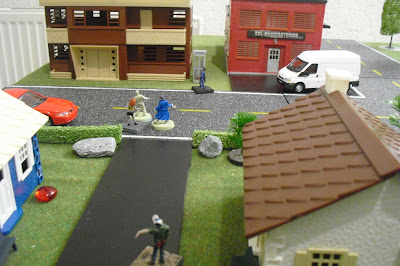 Turn 26:
(5 / 2) All activate, but hey! Team Whiteface is faster than a bunch of undead.
The three humans move across the backyard and try to stay out of sight while the zombies reach the front door. 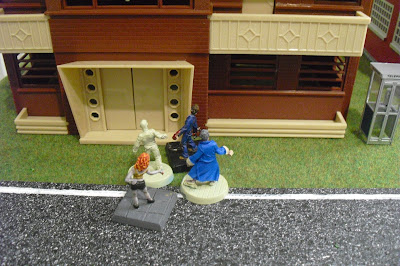 Turn 27:
(5 / 6) This is what I needed. Only the Team activates.
They enter the meat company’s storage area to encounter a solitary zed. He is instantly killed, but who knows what foul creatures may have heard these shots.
2 shots generate 1 foul creature.
Turn 28:
(3 / 2) All activate, but Team Whiteface wins the activation.
Whiteface searches the dead zed to find another unit of luxury items.
The zeds inside the apartment block shuffle around.
Turn 29:
(1 / 4) All activate, but the zeds are allowed to act first.
The zombie mob exits the brown building into the backyard. One zed stops at the open door of the factory where he’s instantly met by two bursts of snap fire. He’s definitely dead, but… 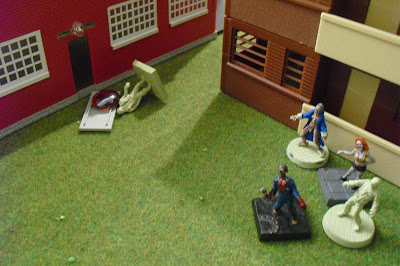 Whiteface decides there is nothing more to gain. They do a fast move and exit the building and the table. 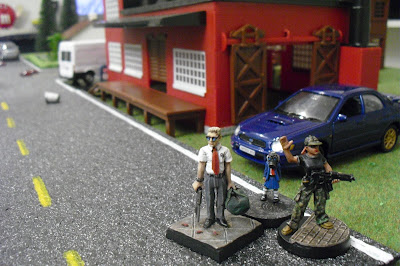 6 shots generate no zeds.
Comment: Well, this mission wasn’t a success for Lynn and yes, I rolled a “1” so her REP is going down to 4. She just isn’t the same person after that incident. This mission was a success for Whiteface, but he wasn’t able to increase his REP. The coming missions are going to be a lot harder.
All in all a pretty basic mission with no real surprises. I really would like to recruit someone for Team Whiteface or at least find someone to barter, but all I get is trouble. Lynn being reduced to REP 4 will probably create some problems, but at least she will let Whiteface lead the Team again. I'll have to do one more mission in Whiteville before I can change into a rural area...if I manage to find some food next mission (you may remember, I don't end a month until I have enough food for everyone
Stay out of trouble.
Whiteface
Eingestellt von Whiteface um 9:05 AM 29 comments: