These are news about broken things: My PC has ceased working this friday. This was where I had created my previous batreps, have Comic Life installed and stored a lot of the pictures from the 1,5 games I've played recently (and obviously the pictures from all those batreps before).
So apart from not having access to about 50% of the pictures from my latest game I am not able to do any batreps with pictures anymore. I don't see myself buying a new PC in the coming months, so I am not sure how I will solve this situation. A text-only batrep won't do my latest games justice.

I have absolutely no clue what part of my PC isn't working, as the boot process is stopped (and restarted) before even the first messages appear on the screen. Starting, two seconds, first air thingie starts, about two or three more seconds, next noise (rotation of hard disc?)  joins in...and with a clicking noise stops working, waits a bit and everything starts again unless I cut off the power. 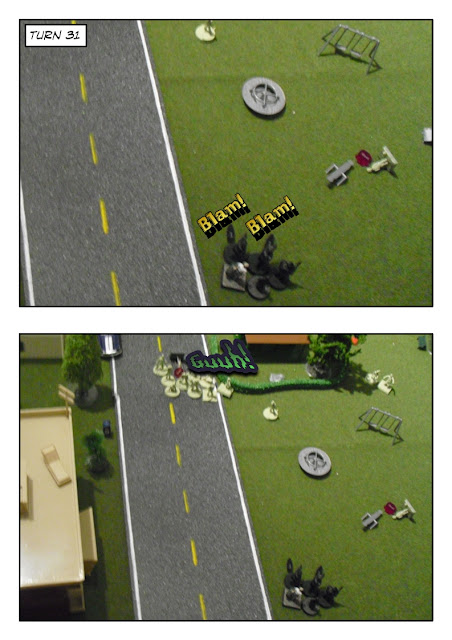 Turn 31: The zombies hesitate under the barrage, so only Team Whiteface is active this turn.
All move away from the undead horde. Two soldiers fire single shots, while the third is reloading his assault rifle. One target is killed, but quickly replaced by a newly generated zed.


Turn 32: (double 6!) No one moves, but there is a random occurrence (dramatic music and deep, hollow voice): Someone left the keys in the ignition! Yeah, wow, and maybe Mrs. Whiteface forgot to switch of the flat iron. 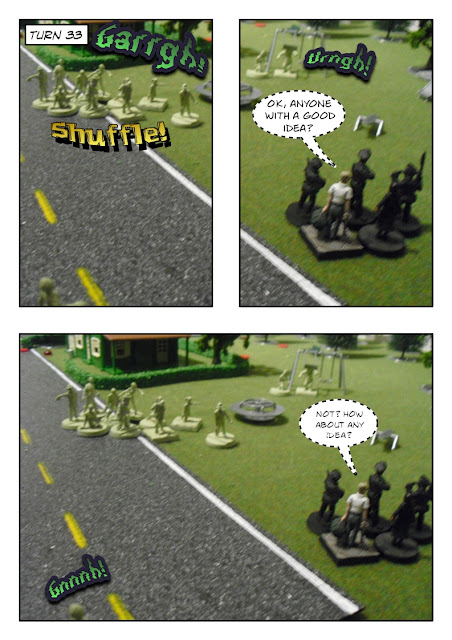 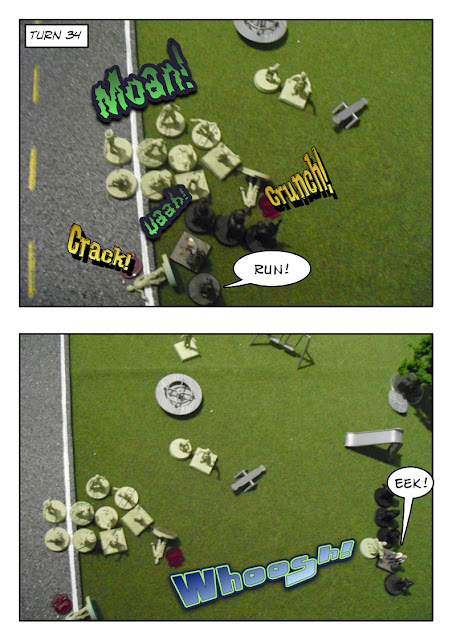 Turn 34: Team Whiteface stop their musing, but too late, the zeds are upon them!

Soldier #1 is evenly matched, soldier #2 and #3 manage to kill one zed in melee, but Mr. Whiteface is in real danger. He has to use his LUCKY attribute in the third round of melee to survive this fight. He finally is able to kill his undead opponent.

Team Whiteface activates and fast moves away from the horde.

Two zombies are spawned as a result of five shots fired and one of those zeds is placed directly into close combat with Mr. Whiteface. Gnaaah! 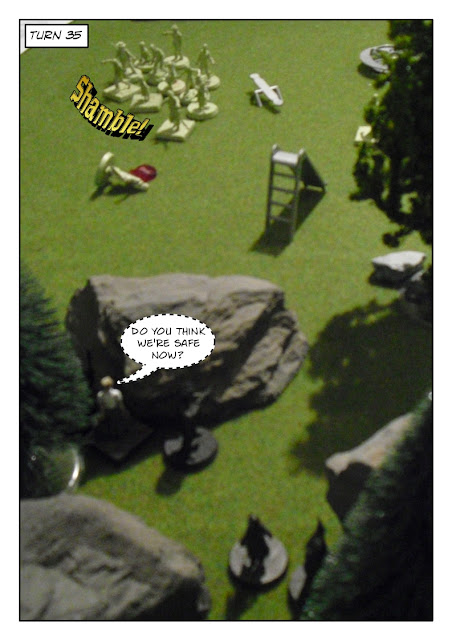 Turn 35: All will activate this turn, but the zombies act first. Maybe Team Whiteface is too slow with all these highly developed (and tasty) brains thinking complicated thoughts…

All zeds pursue the humans. One zed tries to bite Mr. Whiteface but is killed swiftly with +3 successes.

They continue to do what they do best: running away with a fast move. They end their moves out of sight behind the rocks. 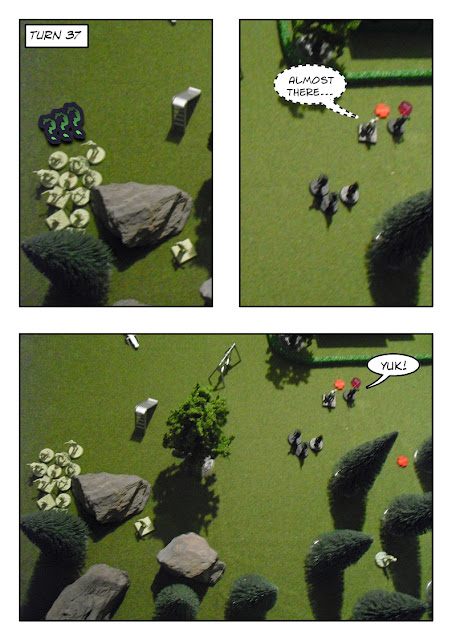 Turn 37: All activate, but while Team Whitefaces discusses whether they are safe now the zombies move closer. In a straight line towards the rocks.

Team Whiteface exits on the other side of the woods, keeping most zeds out of sight.


Turn 38: The zombies don’t activate, puzzled because they lost sight of their supposed lunch. Team Whiteface activates and approaches the chewed up remains of the survivors from the first shootout. 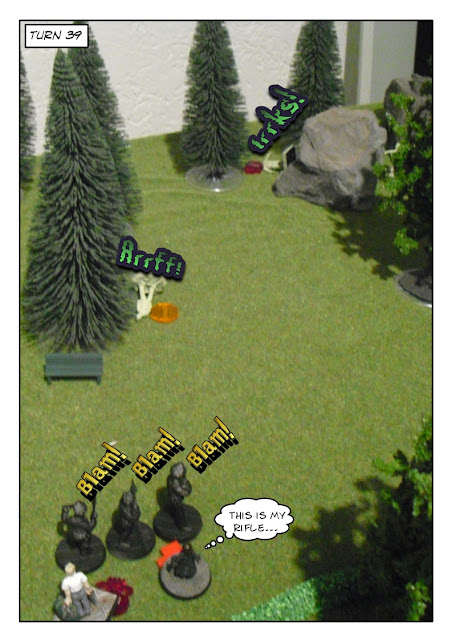 The Whitefaces loot the corpses while the soldiers scan their surroundings. Both take an assault rifle, but cannot find anything else (Looting the Landscape, IZ).

All zeds move, some in a straight move, some where they’ve last seen the humans, one moves randomly.

The National Guard soldiers are allowed an In Sight test and take down two zeds. One killed, one knocked down.

One zed is generated due to three shots having been fired this turn. 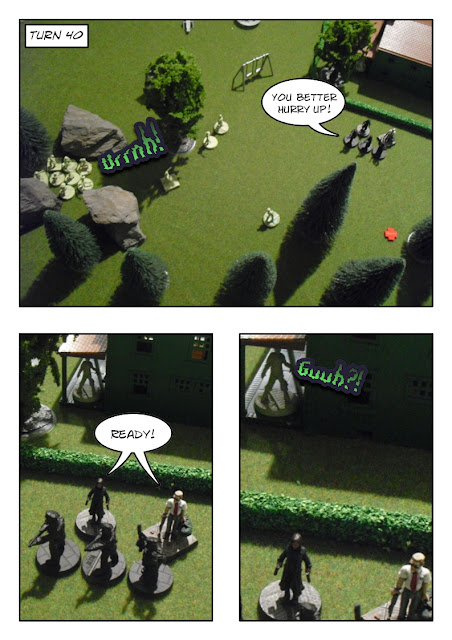 Turn 40: Only the zeds activate this turn to move closer.


Comment: Usually zeds react to shots fired in the same turn, but I couldn’t see the zombies ignore the gunfire last turn, so I turned them towards the noise. Not sure about this. 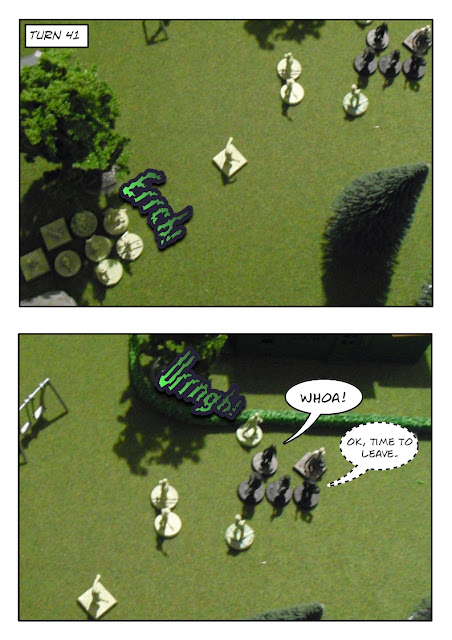 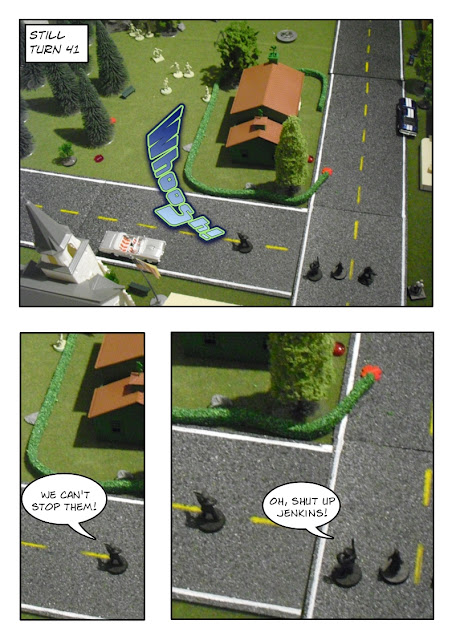 Turn 41: All activate, but the zombies act first. It surely helps to have a target.

All zombies move and only the hedge saves Mrs. Whiteface from an attack into her rear facing.


Comment: I was going to write ‘charge into her rear’, but I am not sure if that isn’t something unintentionally funny.
Team Whiteface decides to leave the area. This leads to a lonely Rep 1 PEF being resolved.

It turns out to be an empty can rattling along the road (0 humans again!).


Turn 42: Only Team Whiteface activates and continues to fast move away. 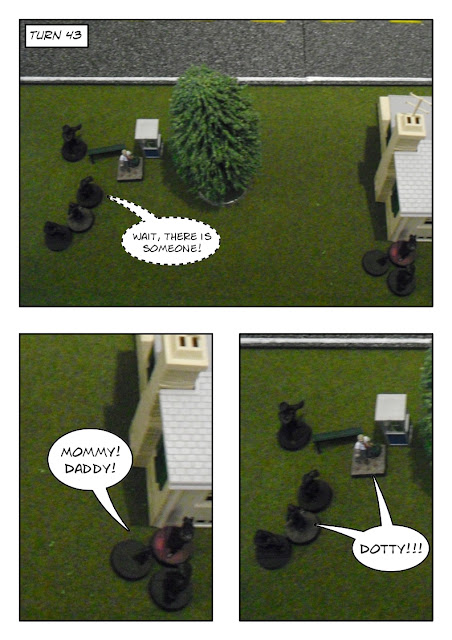 Turn 43: Zombies and Whitefaces activate, but Team Whiteface is quicker.

Team Whiteface walks into LOS of the last Rep 1 PEF to discover two humans and something special. They are a Rep 5 National Guard veteran and a Rep 4 soldier and there is a little girl with them. It’s Dotty Whiteface!


Comment: I had invented a special rule during the first version of Day One when Mr. Whiteface lost his family.
In the first six months of the outbreak (if staying in the same area) every group encountered may include a missed person. Every group being defined as every humans or zeds not being generated as a result of gunfire.
Everytime I meet someone I would roll 2d6:
Double “1” = found missed person – in trouble if with humans or zombiefied if with zombies
Double “6” = found missed person – with friendly humans or zombiefied if with zombies
For every encounter after month 6 (until a not yet defined date) and anywhere I would roll 3d6 with triples being necessary to find someone.
I really hadn’t expect to see little Dotty again - alive and out of trouble - but there she was.
All zeds move closer, including one behind the house that I had missed before. 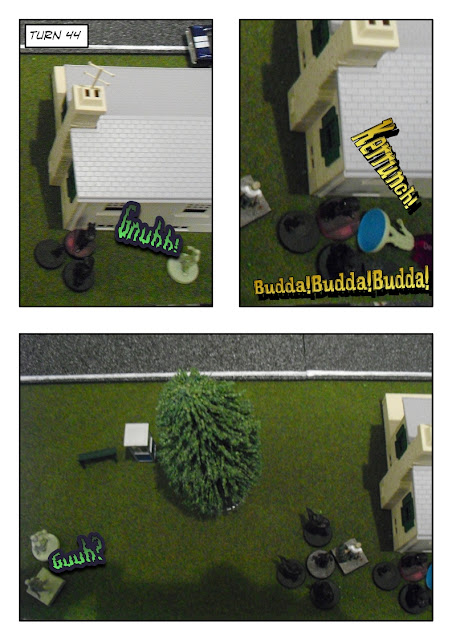 Turn 44: All activate, but the surprising reunion slows down Team Whiteface.

Almost out of trouble! The zeds move and one zed charges the new National Guard soldiers from behind. Both roll test for Being Charged.
The Veteran will melee with a penalty, but his companion is shooting a burst at the charger…and misses. Nevertheless they kill the walking corpse in melee.

Team Whiteface walks up to both soldiers.

As a result of three shots two more zeds are being placed on the table. 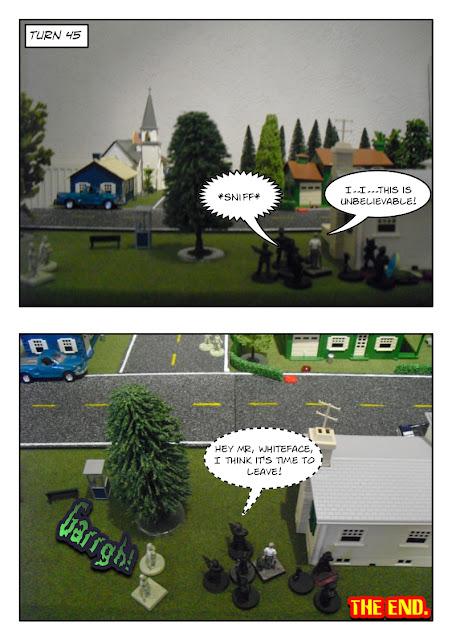 Turn 45: The Whitefaces spend this turn with a lot of hugging and weeping (inactive), while the zombies close in. Two zombies end their movement in charging distance.


Turn 46: Only Team Whiteface is active and decides wisely to leave the table. Mission over!
Final Comment: Even if Mr. Whiteface hadn’t found loot and had not killed seven zombies I would have rated this mission as a total success. Even for Mrs. Whiteface, who found an assault rifle too, killed two zombies but had hunkered because I had forgotten her Free Will, this mission was a total success. They found their little daughter Dotty, what more can be said. Epic success, everything else is just icing on the cake.
Unfortunately Mrs. Whiteface wasn’t able to increase her Rep. She continues to be a Rep 3 Survivor. Mr. Whiteface increased his Rep and is now officially a Rep 4 Civilian. He received his second attribute. It’s (again) ‘Stealthy’ from the Nuts! rules.
This whole mission started very confusing. I wasn’t sure how to handle all those PEFs, do a three sided interaction and fire fight and repeatedly forgot the Whiteface’s Star Advantages. In Part Two everything seemed to be under control, but those two gangers were really annoying and calling for trouble. I was happy when they were defeated. Be careful what you wish for was the motto of Part Three. A lot of gunfire and despaired melee turned into a retreat with Team Whiteface barely staying ahead of the horde. My head start was never big enough to be relaxed during Part Four. This could have gotten ugly pretty fast. The surprising end is absolutely covered in awesome sauce! Everything can happen and everything will happen. Don’t you just love it?
There is only one negative point. I had begun this mission in early October and now it’s December. Two months for playing through this scenario and writing down batreps is way too long. I am sorry for making you wait this long and even more for not having played for some weeks now. But rejoice…the terrain for my next Month One mission is set up for me since about two weeks. I thinks it’s a great layout and I really look forward to my upcoming game.
Thank you
Whiteface
Eingestellt von Whiteface um 10:37 PM 9 comments: