Day 23
Cast: Mr. Whiteface (Rep 4 Star), Lynn (Rep 5 Grunt)
Objective: Search for food
Area: suburban inner city of Whiteville
Special 1: This mission will only count as a success if I gather enough food for this month. The normal victory conditions will only determine if this mission is a “failure” or “neither success nor failure”. I will use this rule from now on every time I have played the usual number of mission for month / area and not have enough food available. This replaces the Rep reduction due to starvation.
Special 2: Lynn hasn’t fully healed her leg injury yet. Her normal movement is reduced to 6” and she will only use 1d6 for Fast Moves.
Yesterday had been rather strange. After all those quiet days before Mr. Whiteface had at first been unable to put a finger on it. It was Lynn who eventually noticed the difference.
“Contrails!”
“What?” Whiteface asked with a puzzled look on his face.
“There…contrails.” she repeated while pointing at the sky.
And she had been right. Later that day they had seen military aircrafts flying in almost every direction.
"This one’s heading to Atlanta, I think.” Lynn said, continuing what had been their guessing game for the last three hours.
“Yeah, by now they must have covered every major urban area up to Mayhem City…” Whiteface answered and quietly added “…and it’s about time they are doing something.”
“Daddy, are they comin’ to save us?” Little Dotty asked.
“Yep Dotty, I should think so. We just have to find some food for the next few days.” 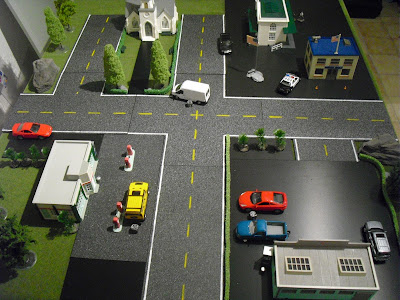 Setup: It’s a standard 4’ x 4’ setup. Whiteface and Lynn are placed in section 7 at the table edge next to the bank building, while Dotty has been left in a hide-out nearby. The scenery is intended to recreate the inner city of suburban Whiteville.
Three PEFs have been placed on the board. One Rep 5 and one Rep 2 in section 2 (next to the super market and behind the yellow H2 at the gas station) and one Rep 1 in section 5 (behind the white Ford Transit).
The following buildings are on the board:
- a super market in section 1
- a gas station in section 2 / 3
- a police station in section 4
- a bank building (well, technically a train station…) in section 7
- a church in section 9


Turn 1:
(4 / 4) No one activates, while Team Whiteface is scanning their surroundings. 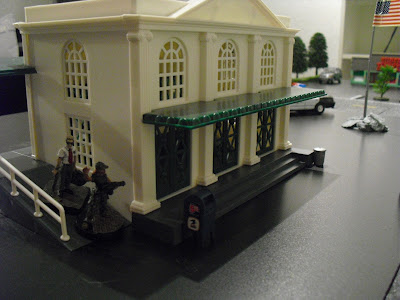 Team Whiteface moves towards and along the bank building. 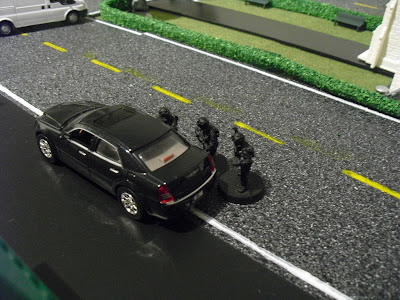 Turn 3:
(4 / 5) The Rep 5 PeF moves from section 5 to section 8. It’s now in sight and in cover behind a car. The PEF is resolved to be three hostile humans. I continue to meet well equipped enemies. This time they are Army soldiers – the real thing, not National Guard. All are Rep 4, Protected and armed with Assault Rifles. I think Team Whiteface is in for some guano deep diving, I guess.
Team Whiteface wins the Encounter Awareness test by one success and will now execute an In Sight test with 1d6. Both will Snap Fire a burst at the marauding soldiers.
Lynn snap fires three shots at #S1 and scores one hit. Leading Soldier #S1 is stunned (Protected).
Whiteface snap fires three shots at #S2, scores no hit and is out of ammo. Oh, bugger!

The soldiers are in for a Received Fire / Man Down test now. #S2 retires and moves towards the church behind him while #S3 ducks back behind the car.

Now Team Whiteface activates:
Lynn fires another burst at soldier #S1 who’s already lying on the ground and scores another stun on him.
Whiteface calmly reloads his Assault Rifle. 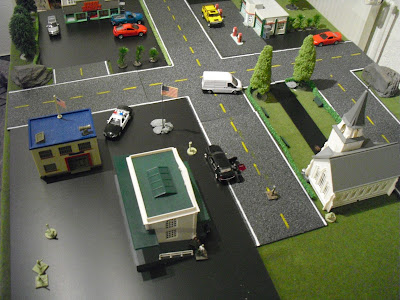 (3 / 1 / 2) Team Whiteface activates.
Lynn fires a burst at the only viable target - #S1 on the ground – but misses with every shot.
Whiteface joins in and scores two hits on #S1. Two OOF are reduced to 2 stunned due to protection. Drokk it!
#S3 could see the target, so he tests for Received Fire and pops out of cover to return fire.
After a moment of irritation I had Team Whiteface checking for In Sight. Both pass 2d6.
Lynn fires a burst at #S3, but misses and is out of ammo.
Whiteface fires a burst at #S3 and scores one hit. #S3 passes 0d6 on his Recover From Knockdown test and is now obviously dead.
Now it’s the soldier’s turn to activate:
#S1 recovers from stun, while #S2 is hunkering down at the door of the small church.
Finally both zeds move.
12 shots have been fired and 4 zeds are created.
Turn 7:
(1 / 5 / 2) Soldier #S1 fast moves towards soldier #S2, who does – after succeeding in a Rally test – carry on.
Team Whiteface activates and moves backwards along the bank building. Lynn reloads her Assault Rifle and Whiteface knocks down a wandering zombie with some burst fire.
3 shots fired generate 1 zed. 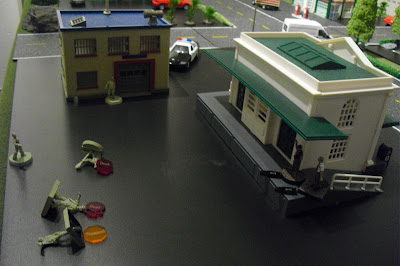 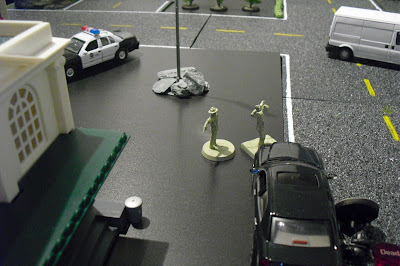 Turn 10:
(3 / 6 / 1) Team Whiteface activates and carries on to fire single shots at the zombies, but don’t hit anything.

The soldiers are doing the same, with the same result. 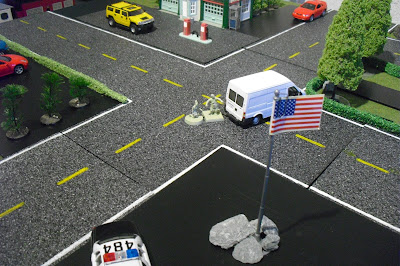 (3 / 1 / 2) Team Whiteface charges the zombie mob with a Fast Move.
Lynn kills the knocked down zed.
Whiteface, after 6 rounds of melee, eventually kills the zed.
The soldiers activate. I decide to roll a dice for a random decision. They had met unexpected resistance, there were zeds around, but they were still a force to be reckoned with. It was 1 – 3 = leave table, 4 – 6 = hunt down Team W. and after rolling a “3 “ they made a Fast Move toward the closest table edge.
The zeds and the remaining PEFs activate. Three zeds start to feast on the soldier’s corpse and will continue to do so until turn 16. Two zeds move towards Whiteface and one zed charges him but is killed without hesitation.
The Rep 2 PEF doesn’t move, but the Rep 1 PEF moves into section 5 in position to be resolved. They are hostile NPCs. 2 Zombies appear at the white van. Team Whiteface wins the Encounter Awareness test and is allowed to snap fire at the new zombies. Both fire single shots, but miss.
2 shots fired generate 0 zeds. 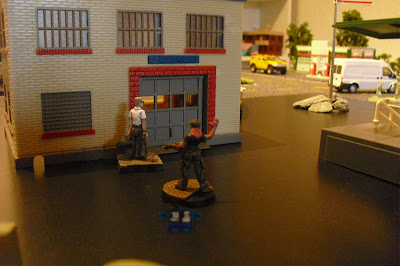 Turn 12:
(1 / 3 / 4) The soldiers leave the table.
The zombie horde moves, some feast and one charges Mr. Whiteface. The charger is killed, but not easily.
Team Whiteface runs towards the police station.
Turn 13 – 14:
(2 / 5) - (4 / 1) Team Whiteface enters the ground floor of the police station to find it vacant. The search in the following turn results in one unit of fuel. Great, am I supposed to drink gasoline?
In the outside world most of the zombies are feasting and the last PEF doesn’t move.


Turn 15 – 16:
(4 / 6) – (3 / 2 / 5) Team Whiteface walks to the upper floor to discover a dazed survivor. It’s just one guy (Rep 3 civilian, Shotgun), but he decides to stay and interact. They have some small talk and decide to co-exist. I am a little bit disappointed about this result. I had hoped for recruiting or bartering. In turn 16 I search the upper floor – well, actually there’s nothing this guy can do about it – to find a Pistol. I am going to need a shopping cart pretty soon. It’s the last turn of zombie feasting.


Turn 17:
(1 / 2) Team Whiteface moves downstairs, after the undead horde has randomly shuffled around the board.


Turn 18:
(4 / 5) Team Whiteface leaves the police station through the front door. The last PEF is In Sight and resolves to be a false alarm. So far, so good. 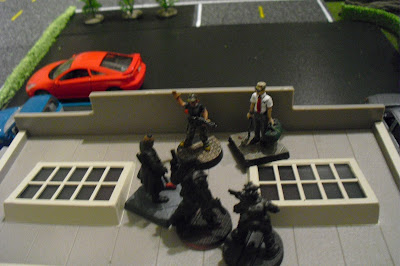 Turn 22 - 23:
(3 / 4) – (5 / 1) The zombies activate and aimlessly hop around. Only one zed has spotted Team W. yet.
Team Whiteface enters the super market. They discover three male survivors. All are Rep 4 and armed with BAP, Machine Pistol and Shotgun. This could get ugly and indeed, Team W. has a “run in”.
The survivors order our team to “get the hell out of here!”, but without being that polite.
Lynn and Whiteface leave the building in the next turn and the zombies move some more. 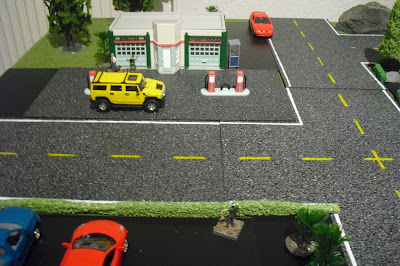 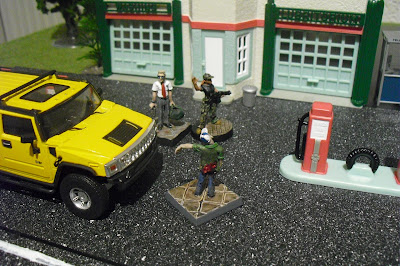 Turn 29:
(4 / 1) The zombies activate and move. The following zombie is closing in, two more zombies now have a LOS to the Team.
Whiteface charges the Zed and manages – after using his LUCKY attribute – to kill the moving corpse. 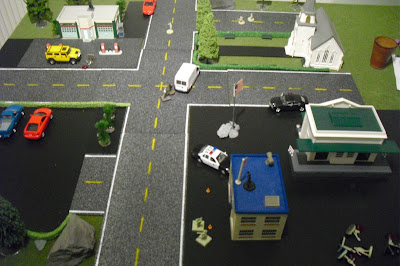 
Turn 38:
(4 / 3) I made a mistake and let the zeds activate first, but anyway, everyone is active this turn.
The zombies move closer. One zed charges Lynn. Both Teammates react with a well aimed single shot and mange to entirely miss their target. They kill him in melee instead.
Lynn and Whiteface activate, charge the next zombie and kill him as well.
2 shots generate 0 zeds.
Turn 39:
(5 / 5) For a moment Lynn appears irritated.
“White?”
“Yeah?”
“You know, three weeks ago, back when I left my home..?”
“Yeah, what about it?”


Turn 41:
(5 / 4) And I did it again. Wrong order of activation. Must have been too late in the evening.
The zeds move closer, one of them charges.
Lynn misses her single shot, but both kill the charging zed in close combat.
They activate and kill another zed in melee as well. 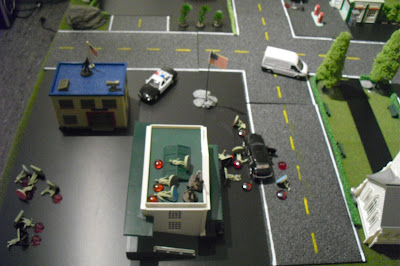 (4 / 1) – (2 / 6) They move into position at the bank entrance. After a short discussion whether moving into a bank with that much armament is a wise move they rush inside.
“Everybody hands up, this is a…Oh, crap!”
They discover three zombies and lose the zombie surprise test. Whiteface will melee two of them, leaving one for Lynn. Remember, Whiteface already used his LUCKY attribute.
Round 1: Whiteface and his two zeds survive, Lynn kill her zed instantly and will now fight one of Whiteface’s assailants.
Round 2: Lynn and her zed survive, Whiteface kills his opponent and will now assist his teammate.
Round 3: Lynn and her zed are equal, but Whiteface finishes the foul creature (the zombie, not Lynn!).


Turn 47:
(4 / 1) It’s time to loot the zeds. They find a knife and…listen up...two units of food. This far into month one my protagonists are not too picky about their food. They really found enough food to take them into the second month of the campaign.


Turn 49 – 50:
Team Whiteface exits the building without checking the upper floor. They leave the table in turn 50.

Comment: Lynn recovers her injured leg, but there are no Rep increases this time. Technically Lynn continues to be the leader of the pack…err, duo.
I didn't really expect to find food in this mission anymore, especially not on zombies. When I failed that zombie surprise test I really thought that at least one member of Team Whiteface would go FUBAR. But no, everything is ok for the moment.
I made one change before starting this mission: Mr. Whiteface lost his "Stealthy"attribute (Nuts!) which he hadn't used anyway and which seemed pretty dumb since I included Encounter Awareness tests into my games. He receive "Stone Cold" instead. The additional die may be useless for a Star, but he will receive a bonus for Draw Down situations. "Stone Cold" sounds like a good choice for someone who had to shoot his infected wife in a derelict mobile home.
Now Team Whiteface enters the second month of the z-apocalypse, but with renewed hope. Apparently the military has found a solution!
Note: This software has really been wrecking up this batrep. Relocating and removing parts of the text or pictures, not letting me change the Font size for turn 30-34 and leaving a lot of blank space behind this batrep. So, if you notice anything strange, blame it on the software and leave a comment.
Are you prepared?
Whiteface