There was a lot of trouble at work, so I decided to pack my things, call my wife and drive home. I was getting a bit nervous when the telephone network wasn’t working and took a short cut from the office to my car, a blue Ford F-150. Still in my office clothing - white shirt, tie, everything – I stumbled through the woods and shrubbery. 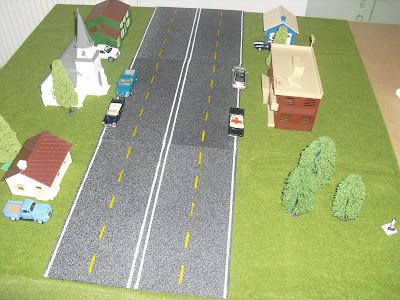 pic. #1: Buildings and vehicles according to suburban arean rules, but I need to get a lot of props. Anyway, will work.

Mr. Whiteface starts on the right border, behind a group of trees. His objective is the blue pick-up parking in front of the church.
Turn 1: Mr. Whiteface is analyzing the situation, cleaning his shoes and brushing his clothes. (i.e. he’s doing nothing at all). 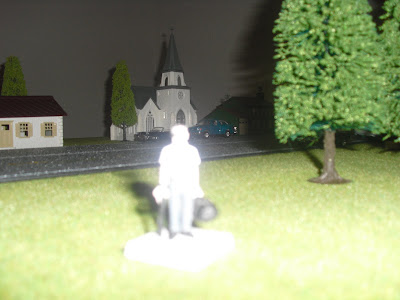 
Turn 2: After careful observation Mr. Whiteface concludes that this is going to be easy. Hello, there’s no one in sight. What could probably go wrong?

He is doing a successful Fast Move along the right flank of the trees and into the shadow of the apartment block. His car is directly across the road and there is almost no traffic.

Turn 3: (Double 6!) Uh-Oh! While he’s standing at the corner of the brown apartment block fumbling for his keys he doesn’t notice that there is a couple of pushy adolescents in front coming for him.

*Thud!*
The male teenager tries to hit Whiteface, but he pushes him back onto the road.

*Wham!*
Whiteface turns to face the girl just in time to receive a powerful kick. There is only pain and darkness and certainty that he won’t be able to walk straight for the next days.

Mr. Whiteface has been knocked out with an OD result. This location is over and his car is gone. When he regains his conscience he decides to change his plans. There is no sense in going to the supermarket without a car. His next location will be his home.

It’s going to be a long walk and with zero successes on the Getting There Table he will arrive there on Location #4!


Without hesitation Mrs. Whiteface drove to the Whiteville Kindergarten in her old pick-up. She stopped her car when the Kindergarten was in sight. There were lots of terrified people coming from the church or evacuating their children. No sense in driving through this crowd. 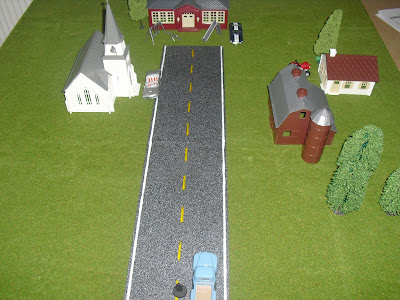 pic. #3: There isn't much too see in this rural area. Did I mention that I need more scenery?


North is at the bottom of the road leading to her objective. There are 6 terrified civilians in front of her car.

Turn 1: North stares at the crowd and thinks about this situation. She will be better off walking. (i.e. she doesn’t activate) 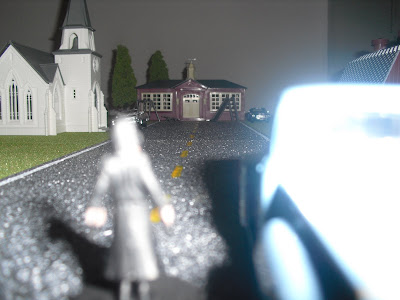 pic. #4: I have a bad feeling about this!
Turn 2: (Seven!) Two Zombies appear, but these aren’t her real problem. She leaves her car and faces six terrified people.
North pushes against the first male, it’s an even fight, but in the end she’s going down.
North has been knocked out with an OOF result. She awakes on the road beneath her car. Tears run down her face when she realizes that this location is over. As a result of her erratic driving due to her condition she will arrive at home on Location #3.
Final comment: I thought I'd need more buildings or a lot of police cars, but now my shopping list has changed. I need stuff to bring more life into the countryside. Hills, trees, hedges, whatever. I wasn't that surprised that North had been knocked out, but I was a bit surprised that Whiteface didn't reach his objective. In hindsight I should have gone home first and taken a large axe from the tool shed. Aw, live and learn...if you survive.
Whiteface
P.S.: I am not yet fully satisfied with the appearance of my posts. I wish I had more possibilities / tools to create something with more structure. It's not WYSIWYG, it's you see something, you get something different every time.
Eingestellt von Whiteface um 1:50 PM